Tips and Tricks to Help You Double Your Festival Fundraising, Sponsorships and Volunteers

Our president, Terry Terry, will be presenting a workshop entitled "Tips and Tricks to Help You Double Your Festival Fundraising, Sponsorships and Volunteers" at the Michigan Festivals & Events Association's 19th annual convention on Friday, Nov. 4 at 1:45 pm at Kalamazoo Radisson Plaza Hotel in Kalamazoo, MI.

Nothing keeps festivals going and growing so much as the contributions of sponsors and volunteers. This interactive, hands-on session shares tools and lessons from the experience of producing major music/art festivals in Old Town Lansing to catalyze community development.

You’ll learn how a fledgling nonprofit became a powerhouse in festival production, creating high-end events that draw tens of thousands of people and have resulted in tens of millions of dollars of investment in the community. You’ll also gain practical tools to assist in raising funds, developing cash and in-kind sponsorships, and developing your base of volunteers (another in-kind sponsor). From the value of media sponsorships to ways to make volunteers feel valued and keep returning, this session will share nuts and bolts.

He is also CEO of Old Town Lansing-based MessageMakers – a communications company recently named one of 2011’s 50 Companies to Watch in Michigan. With MessageMakers, Terry has developed courseware on sponsorship and volunteers for the use of Harley-Davidson worldwide.

Terry was recognized as 2011’s Greater Lansing Catalyst for Change – Individual, as well as receiving the Lansing Regional Chamber of Commerce’s 2008 Outstanding Small Business Award and 1999 Small Business Advocate of the Year Award.

The convention, held November 4-6, 2011, will also feature workshops by Brittney Hoszkiw of Old Town Commercial Association, Corinn VanWyck of East Lansing Art Festival, and many others heavily involved in festivals and events across the state. 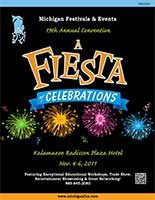